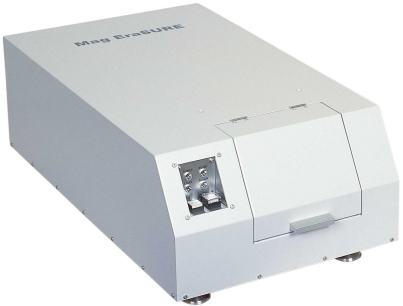 Erasing everything on a hard drive isn't easy, even after reformatting and rewriting the drive several times it's still possible to recover some of the data. This can be dangerous for companies in financial, medical, legal and data center markets. So Fujitsu decided to launch a new professional degausser device called Mag EraSURE P2V to deal with this problem.

They say this product is an effective, economical solution for industries that require fast and secure removal of magnetically recorded data from hard disk drives, removable disks and backup tapes. According to Fujitsu the Mag EraSURE purges magnetically recorded data up to 5000 Oe in 60 seconds, making it impossible for commercial data recovery services to recover the data.

The Fujitsu Mag EraSURE features a one-touch operation. You simply insert the drive into the degausser, push the button and the device handles the rest. It works by passing the media through a large magnetic field. Additionally, the device also destroys the read/write heads.

Fujitsu also has the Mag EraSURE P3E, which was launched January. This product is aimed at High Security applications and features data erasing capabilities up to 5300 Oe.