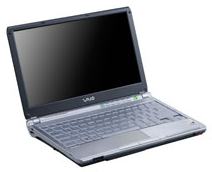 One of the most technically advanced and adventurously styled notebooks Sony has ever created now features strong, multi-layer security. Executives drawn to the VAIO TX3-Series by its huge visual appeal can rest easy in the knowledge that it will protect their data from snooping and even accidents. What’s more, the latest Intel Core Solo Ultra-Low Voltage (ULV) processor means plenty of power for work and exceptional battery life on the go. The TX3 really is the traveller’s friend, combining very low carrying weight with up to 7 hours running time on battery power.

Unlike many ultra-portables, the TX3 even features a super-slim, fully integrated DVD±RW optical drive, complete with double layer (DL) technology for massive extra capacity. The Series uses a rock-solid combination of fingerprint recognition1 and hardwired, chip-level Trusted Platform Module (TPM) security2 to prevent anyone but the owner ever getting in. TPM even prevents malicious software from harvesting vital information like passwords and encryption keys by storing sensitive data on the chip itself. The TX3’s hard disk is also physically guarded by G-Sensor Shock Protection, which automatically parks the drive heads safely if the notebook is dropped. All this makes the TX3 a very tough nut to crack indeed.

Which is equally true of the notebook itself. Despite being pleasingly compact and eminently portable at a mere 1.25kg, the TX3 is exceptionally robust. This derives from a choice of construction material more familiar in the aerospace industry and the world of Formula One. The carbon fibre laminate engineered to form the case surpasses the strength of magnesium alloy yet actually weighs less. The same high-tech laminate gives the 11.1-inch widescreen display its great strength while allowing the designers to reduce it to an unprecedented – and eye-catching – 4.5mm wafer. X-black LCD enhancement boosts brightness and contrast, bringing the picture vividly to life, so however you look at it, this slice of a screen is another stand-out TX3 highlight.