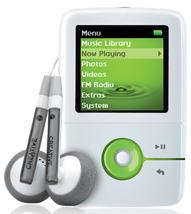 Creative has released a new small Apple iPod nano rival, the Zen V Plus. It's so tiny it tucks away perfectly inside the coin pocket of your jeans, the ZEN V Plus has such great curves and contours and is so lightweight that you'll almost forget it's there except for its phenomenal sound quality. Its beautiful 1.5-inch color OLED screen displays stunning digital photos, video and color menus.

The ZEN V Plus supports music subscription services including Yahoo! Music Unlimited, Urge, Napster To Go, and Rhapsody To Go, in addition to supporting Audible audio books and pay-per-download services including Soundbuzz. Each player includes a line-in port for direct recording from a CD player or other audio device, and a voice recorder for capturing notes on the go.