It has been a while since we released our XDream. It may seem that we stayed low profile for such a long time, but believe it or not, we invested a lot of human resources to bring you new ideas and new technologies! Something even more spectacular than the previous Heat Pipe Technology! 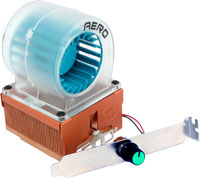 The basics of CPU heat dissipation using an axial fan is that the air pressure & volume produced by the fan exchanges with heat from the heat sink. However, only the farthest side of the blade from the axle produces the most air pressure and volume, and most importantly, it is unable to blow towards the center of the heat sink, which of course, is the hottest part of the heat sink. 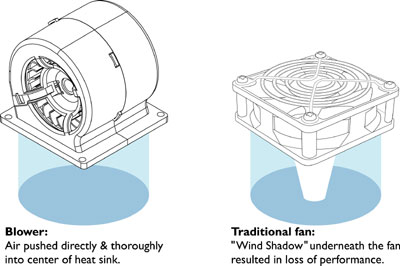 And that's why Aero series has been invented. This blower is quite different from others normally available on the market. It uses a different kind of motor, enabling the fan blades to push air directly into the center of the heat sink. Furthermore, blowers produce larger air pressure than traditional axial fans, thus they can preform extremely well even with lower speed settings. Aero 7 is for Socket A, 370, 462, 7 and It uses copper stacked fin design.

XDream has received tremendous response due to superb price / performance ratio; we gather feedback by constantly listening to our valuable users and developed XDream Special Edition (HSC-V83), an advanced version of previous XDream (HAC-V81). XDream Special Edition inherits all the benefits from XDream as well as a few great add-on features: Using Copper Skived Fin Technology; 3.5” drive bay cover also included (user have options to adjust the fan speed at the front of the chassis!); Multilingual Installation Guide is included (Buddies who speak French, Italian, Portuguese, Spanish, Chinese, Japanese etc. will have no worries of installation!). Last but not least it is our overclockers’ choice cooler that even over performs our famous HHC-001! 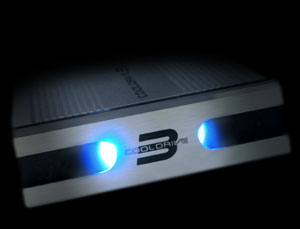 CoolDrive 3 was supposed to be released last year, however due to a lot of design innovation, it was postponed until now. This reflects our committment to maximising our product pontential. Uniquely designed front panel and the embedded blue LED lights will make your chassis come alive!

Aero 7, XDream SE and CoolDrive 3 will be available on April 1st worldwide!