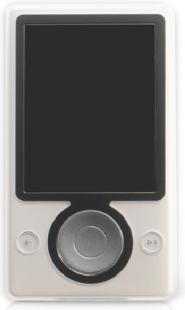 Microsoft is rumoured to launch the Zune digital audio players this fall, they will likely be available in three colors for $299.

Retailers who have been briefed by Microsoft told TWICE the player will offer Wi-Fi capability, but will require that the portable be connected to a PC for the actual purchase of songs. Retailers, who claimed Microsoft remained “fuzzy” on the Zune’s wireless capability, said only that Zune will allow users to bookmark songs that may be shared via Wi-Fi, but that users cannot purchase songs on the go from the Microsoft Zune Web site.

Both retailers said the player would incorporate a 30GB hard drive. One said the unit’s display screen would be larger than Apple’s iPod models. The retailers were pleased with Microsoft’s feature-per-price package.