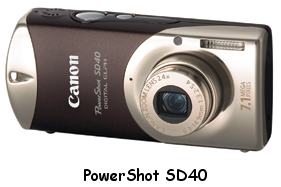 The PowerShot SD900 Digital ELPH: Titanium Body and Ten Megapixels Too
The flagship of the Digital ELPH camera line, the 10-megapixel PowerShot SD900 Digital ELPH takes the attractive and comfortable feel of the "perpetual curve design" and for the first time ever, renders that body in strong and durable yet lightweight Titanium. The result is a high-res digital camera with smooth lines, an elegant satin finish, and an impressive (though petite) package of top-tier photo features. About the size of a deck of playing cards, the SD900 Digital ELPH camera measures fractionally more than an inch thick with its 3x (37-111 mm equivalent) optical zoom lens retracted safely into the case; a mere 2.35 inches high and less than 3.6 inches long.

This new SD800 IS model features a number of significant advancements, including improved low-light performance due to the combination of optical IS and a top ISO speed of 1600, and for the first time in the Digital ELPH series, an optical 3.8x wide range zoom lens (28-105mm equivalent), which employs Canon's UA lens technology that permits a longer zoom capability in a smaller amount of space.

The camera's large, 2.5-inch high resolution LCD screen has been enhanced to approximately 207,000 pixels with a bright, wide, easy to read viewing area and is set attractively into the Digital ELPH's rugged, stainless steel shell with its iconic perpetual curve design. In keeping with a decade of ELPH philosophy that proclaims, "great things come in small packages," this pocket-sized photo powerhouse measures just under an inch thick with lens retracted, 2.28 inches high and 3.52 inches long. The Canon PowerShot SD800 IS Digital ELPH carries an estimated selling price of $399.99.

The PowerShot SD40 Digital ELPH: Elegant, Economical and Easy-to-Use
The fashion plate of the Digital ELPH line of cameras, Canon's new SD40 Digital ELPH packs 7.1 megapixels of righteous resolution into a color-keyed, stainless steel case that bespeaks luxury and is a must have accessory for a memory-making night on the town. Similar in design to its 5.0 megapixel predecessor (SD30 Digital ELPH model), the SD40 Digital ELPH series offers four new elegant shell tones in Twilight Sepia, a dark rich brown with gold accents; Precious Rose, a blushing pink attention-getter; Noble Blue, a shade worthy of the finest designer navy suit and, the soft yet solid sophistication of Olive Grey.

With any of these four fashion finishes, the SD40 Digital ELPH camera is a formidable, fine and fun to use camera. From the virtuosity of its 7.1 megapixel CCD and its retractable 2.4x optical zoom lens (38-90 mm equivalent) to its easy-to-read 1.8-inch backlit LCD monitor with 15 brightness settings the SD40 Digital ELPH camera is Canon to the core.

Canon supplied the PowerShot SD40 Digital ELPH camera with an easy to use camera station that serves as a charger, enables Hi-Speed USB 2.0 for direct printing and image transfer to a PC, and is even supplied with a wireless remote to facilitate slide show displays when sharing images on a television screen. A mere 0.94-inches thick with the lens retracted, 1.78-inches high and 3.78 inches long, the camera body weighs in at a very modest 3.7 ounces. The Canon PowerShot SD40 Digital ELPH camera carries an estimated selling price of $349.99.