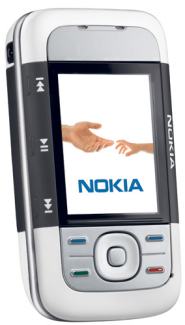 Nokia launched an exciting new range of music phones during an exclusive event at Nokia Theatre in New York's Times Square. Headlined by the Nokia 5300 XpressMusic, which features a stylish slide design and holds up to 1,500 tracks, these music phones make it easier than ever to carry a single device by combining the best of mobile communication and mobile music. With today's announcement, Nokia broadens its portfolio of music-driven mobile products, giving consumers an unparalleled array of choice. The new products announced today will begin shipments in select markets within weeks.

In addition, Nokia today revealed two other music devices, the Nokia 5200 and the Nokia 3250 XpressMusic. Featuring a similar lifestyle-inspired slide design as the Nokia 5300 XpressMusic, the Nokia 5200 offers an exciting combination of music and messaging functions and is an even more budget-friendly handset for young and sociable consumers. The Nokia 5200 is expected to retail for around 200 EUR, before taxes and subsidies.