New study is a bit more optimistic about global deforestation 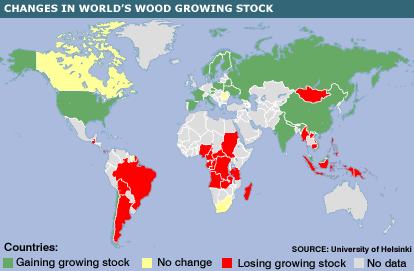 A new study says the world could be approaching a "turning point" from deforestation. The scientists used a new technique to measure timber volumes, biomass and captured carbon instead of just land areas covered by trees.

The researchers say the trend is better than previously thought, claiming their may come an end to deforestation.

"Previously, the focus was almost exclusively on the size of a forest area," he told BBC News. "Now, we have included other components, including biomass and the amount of carbon stored."

He said this approach offered a better understanding of the natural resource: "When we look at changes in both area covered and biomass, we can get a more complete picture of the ecosystems."

When the technique was applied to data from the UN Food and Agriculture Organisation's (FAO) Global Forest Assessment report, the researchers found that forest stocks had actually expanded over the past 15 years in 22 of the world's 50 most forested nations.

They also showed increases in biomass and carbon storage capacity in about half of the 50 countries.

However, they found forest area and biomass was still in decline in Brazil and Indonesia among a few other areas. The report also sees a correlation between a nation's economic growth and forest transition:

The researchers found that when Gross Domestic Product (GDP) per capita reached $4,600 (£2,400), many nations experienced forest transition and saw an increase in forestry growing stock (volume of useable timber).