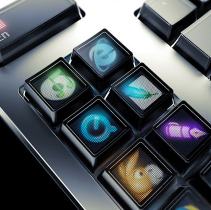 Do you still remember the Optimus keyboard from the Russian folks of Art Lebedev? Well, it's been almost a year and a half ago since they announced this keyboard and it looks like it will finally be available in March 2007.

But there are a few problems with the keyboard, it's not really the impressive piece of technology anymore that they announced in mid-2005. First they announced the "launcher" keys which you can see in the photo on the right will be dropped, then they said the displays will be only half the size of the key and a few days ago they announced they've dropped color support. The Optimus 103 will only have B&W displays, but they may launch a new version later (maybe late 2007 or 2008?) at a greater price that does feature color OLED displays.

Today Art Lebedev announced the price of the Optimus 103. It's - hold your breath - $1,200! Preorders will start on December 12 but I don't think they will sell many, $1,200 is just way too much for a keyboard with some B&W displays. The price will drop below $1,000 in September 2007 but that's still way too expensive IMO.

I think that if they want to get a reasonable amount of sales the price should drop to $350 or even lower. But I suppose it's not yet possible to produce a keyboard with OLED displays for that price.