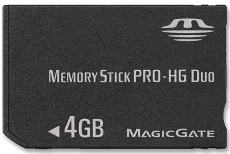 "Memory Stick PRO-HG" media offers high performance to meet the stringent demands of end users. This new media format uses an enhanced, 8-bit parallel interface in addition to a conventional serial and 4-bit parallel interface. The interface clock frequency also increases to 60MHz from 40MHz. This means that maximum data transfer speed increases up to 480Mbps, or 60MB/s (theoretical value), three times as fast as that of "Memory Stick PRO" media. The minimum write speed at 8-bit parallel transfer is 120 Mbps, or 15MB/s*1. These enhancements allow large data amounts of up to several gigabytes to be quickly transferred, as well as the real-time recording of high-resolution video and still images.

Licensing for the development of "Memory Stick PRO-HG" compliant host devices is scheduled to commence in January 2007.