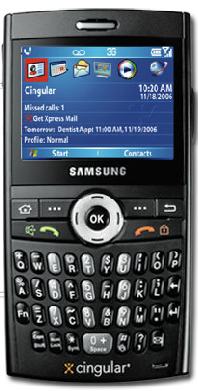 RIM sued Samsung for patent infringement over the new Samsung i600 "BlackJack" phone:

In the suit filed Dec. 8 in the U.S. District Court for the Central District of California, RIM alleges Samsung has decided to name one of its handheld devices the BlackJack to ride on the coattails of success enjoyed by RIM's BlackBerry line of smartphones.

"With intentional disregard for RIM's trademark rights, Samsung has used the BlackJack mark in a manner which is confusingly similar to RIM's BlackBerry marks," RIM states, adding that "as a result of such acts, Samsung is misleading the public into falsely believing that Samsung's goods and services are connected with RIM's business."