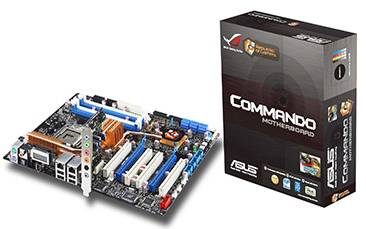 Last week ASUS presented its ASUS Commando motherboard, which is a new Core 2 board designed for overclockers.

The Commando is part of the R.O.G. (Republic of Gamers) family of gaming motherboards. In its labs ASUS was able to overclock the FSB to 2,280MHz and the memory to 1,300MHz. The specifications of their test system aren't listed in their press release but they did include a screenshot of Super PI and CPU-Z. The screenshot is pretty small and hard to read but I think they used a Core 2 Extreme X6600 processor.

The ASUS Commando supports dual-core and quad-core Core 2 processors from Intel and accepts 533/667/800MHz memory modules. It features Intel's P965 chipset and the ICH8R southbridge and supports a FSB of 800MHz and 1066MHz. It has six Serial ATA 3Gbps ports and has support for ATI CrossFire. It also features SupremeFX ADI 1988b built-in audio.

Some other special features: