LaunchPoint wants to use magnetic track to send stuff into space 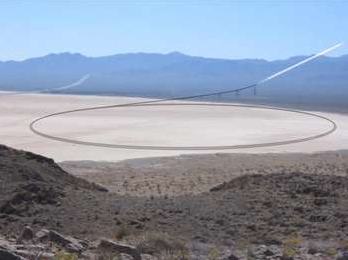 LaunchPoint is trying to create a magnetic space launch device after receiving a $500,000 Phase II contract from the U.S. Department of Defense Small Business Technology Transfer Program. Here's some info on how the magnetic launch track should work:

The current LaunchPoint Technologies design has a large ring of superconducting magnets that would fling the object into space, or into orbit around the world. A high-speed accelerator would whip an object weighing up to 220 pounds around a circular vacuum tunnel that has a 1.5-mile-radius. The object, which is encased in a polycarbonate, cone-shaped sabot for protection, would be attached to a magnetic sled. Electromagnetic motors located inside the tunnel would continue to accelerate the unit until it reaches its top speed of 10 kilometers per second, which is when laser and pyrotechnic devices would help separate the cone from the sled.

The cone will then launch towards space at a reported 8 kilometers per second. Any device launched in this manner would have to be able to withstand a minimum of 2,000 Gs -- the equivalent to 2,000 times the force of gravity. A passenger in a car crash at 60 miles per hour experiences acceleration of approximately 100 Gs: LaunchPoint's technology is strictly for cargo. The projectile will contain a small rocket engine and avionics, which would allow it to steer once it leaves Earth's orbit.

LaunchPoint says its technology should make it a lot cheaper to send payloads into space. The company promises a cost of $750 per pound, which is more than five times cheaper than rocket-launched payloads which cost roughly $4,000 per pound.