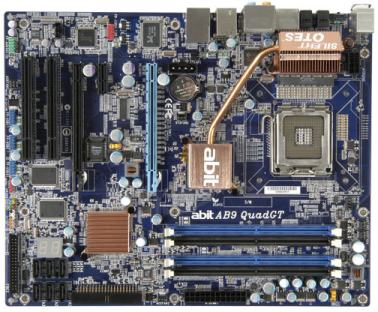 The year just started and Abit already introduced a new motherboard for overclockers, the Abit AB9 QuadGT which uses the Intel P965 chipset. The AB9 QuadGT supports Intel Core 2 Duo and Quadro processors with up to 1066MHz FSB.

Abit promises they took durability and stability in mind when designing this board. The motherboard features a 6-layer board layout and they've only used Japanese solid state capacitors and ceramic digital PWMs to guarantee the finest electrical characterisctics under the most stable currents. The solid state capacitors used on this board work at temperatures up to 350°C and have a lifespan of 40,000 hours at temperatures under 85°C.

The board supports Abit's µGuru overclocking technology and features the Silent OTES convection heat-pipe which cools the board's P965 Northbridge and the digital PWMs (voltage modulators).

The AB9 QuadGT motherboard does not only have extreme power under the hood, it is also ready for full on gaming and multimedia action. Two X16 PCIe slots offer a wide range of multiple graphics options. Despite one of the X16 PCIe slots only supporting PCIe X4 bandwidth, it still caters adequately to most of today's graphics needs, including CrossFire operation. Alternatively you can also use this slot for other PCIe cards such as LAN, RAID, TV or audio add-on cards. A simple and flexible solution that serves almost any high-speed expansion demands. The 3-pin HDMI header connects with HDMI ready graphics cards, offering crisp HD audio.

6 internal SATA 3Gb/s and 2 eSATA connectors for the fastest hard drives on the market form the basis for more than sufficient storage capacity, while the single Ultra DMA 133/100/66/33 IDE connector provides the option to keep your older optical drives and HDDs running.

Quick overview of the most important features: