SanDisk 32GB notebook SSD - if you're willing to spend $600 more 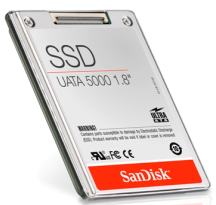 SanDisk presented a 1.8-inch solid state drive (SSD) for notebooks. This flash-based drive has a storage capacity of 32GB and it's aimed at enterprise users. These drives are more reliable than normal HDDs and feature high performance.

“This is an important milestone for SanDisk in our relentless quest to create new large-scale markets for flash storage solutions for consumers in the personal computing space,” said Eli Harari, SanDisk CEO. “The 32-gigabyte SSD that we are announcing today represents the fifth generation of flash-based solid state drives developed by msystems, which we recently acquired. The 32GB SSD has been made commercially viable through SanDisk’s technology leadership coupled with msystems’ tremendous experience and IP, which are captured in the high-performance, low-cost system controllers that distinguish this product.

Harari says that once they start shipping the 32GB SSD drives the price of flash memory will continue to drop. Initially a 32GB SanDisk SSD is expected to add about $600 to the cost of a notebook PC in the first half of 2007.

The drives have a high MTBF of 2 million hours because they don't contain any moving parts and they feature a sustained read speed of 62MB/s and a random read rate of 7,000 inputs/outputs per second (IOPS) for a 512-byte transfer. The average file access rate is only 0.12 milliseconds, a lot less than the 19 milliseconds of conventional hard drives. Another serious advantage is the low power consumption of 0.4W which is 2.5 times less than a hard drive.

SanDisk says a notebook with this SSD can boot Windows Vista Enterprise in less than 35 seconds, compared to 55 seconds for normal hard drives.

The only thing that really keeps these drives from breaking through is the high price of flash memory. A premium of $600 for a 32GB drive is way too much for regular users.

Another interesting article to check out is this one about the heat-assisted magnetic recording technology from Seagate. The HDD drive makers says it will be possible to ship 300Tb HDDs within a few years with this new technology.