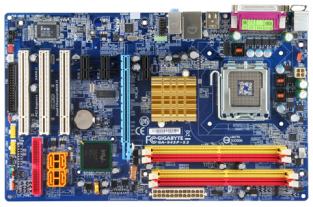 Gigabyte presents a new lineup of 945 series motherboards with all-solid capacitors which have a lot longer lifespan the the previously used electrolytic capacitors.

Generating less heat than their electrolyte counterparts, solid capacitors last on average 6 times longer, helping to ensure that PCs stay reliable for longer. Additionally, solid capacitors have a higher tolerance not only for higher temperatures, but they also perform better with higher frequencies and higher current than electrolytic capacitors. The excellent heat resistance and better electric conductivity allows enthusiasts to tweak the highest levels of performance from their system without fear of excessive capacitor wear or exploding capacitors.

These capacitors were already used on the 965 series motherboards and the company says they should improve overclocking.