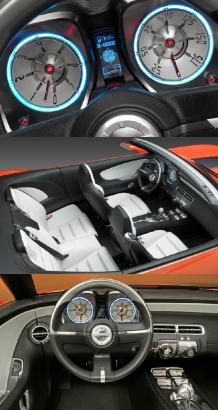 Chevrolet will show off its new Camaro convertible concept at the 2007 Detriot Show. This is a new two-door car for four passengers that will make it to the market in late 2008 as a 2009 model.

The convertible concept has charcoal SS stripes over a lustrous Hugger orange paint job-the stripes are so dark they appear black under certain light. You might think of the 1969 Camaro RS/SS Indy 500 official pace car, which has orange stripes on a white body.

The two back seats are about six inches closer together to make room for the tonneau cover. As in last year's coupe, the front seat tracks are on the center console and on the rocker panels instead of the floor for better rear-seat foot space. Circular gauges in square frames seem certain for production. The large, round gauges now are white-faced, with black chrome numbers and a red anodized needle, for more clarity, versus the coupe's turned-aluminum face with chrome numbers.

Some of the features:

Some more information can be read at MotorTrend.