Posted on Monday, Jan 08 2007 @ 02:47 CET by Thomas De Maesschalck
General Motors presented the Chevrolet Volt concept sedan car, which is powered by GM's next-generation electric populsion E-flex System. The Chevrolet Volt is a battery-powered, four-passenger electric vehicle that uses a gas engine to create additional electricity to extend its range. The Volt draws from GM’s previous experience in starting the modern electric vehicle market when it launched the EV1 in 1996, according to GM Vice Chairman Robert A. Lutz.

“The Chevrolet Volt is a new type of electric vehicle. It addresses the range problem and has room for passengers and their stuff. You can climb a hill or turn on the air conditioning and not worry about it.”

The Volt can be fully charged by plugging it into a 110-volt outlet for approximately six hours a day. When the lithium-ion battery is fully charged, the Volt can deliver 40 city miles of pure electric vehicle range. When the battery is depleted, a 1L, three-cylinder turbocharged engine spins at a constant speed, or revolutions per minute (rpm), to create electricity and replenish the battery. According to Lutz, this increases the fuel economy and range.

In addition, the Chevrolet Volt is designed to run on E85, a fuel blend of 85 percent ethanol and 15 percent gasoline. Using E85, fuel economy of 150 mpg would translate into more than 525 miles per petroleum gallon.

In the event a driver forgets to charge the vehicle or goes on a vacation far away, the Volt would still get 50 mpg by using the engine to convert gasoline into electricity and extending its range up to 640 miles, more than double that of today’s conventional vehicles. 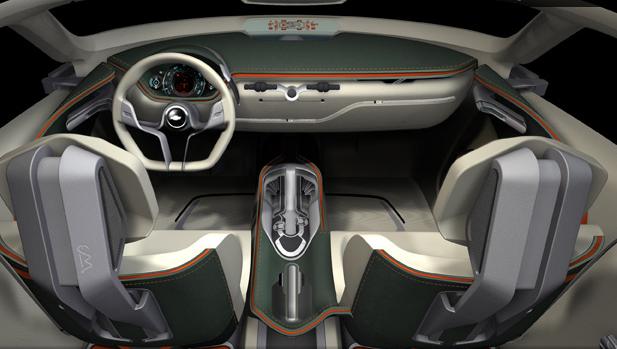 A technological breakthrough required to make this concept a reality is a large lithium-ion battery. This type of electric car, which the technical community calls an “EV range-extender,” would require a battery pack that weighs nearly 400 pounds (181 kg). Some experts predict that such a battery – or a similar battery – could be production-ready by 2010 to 2012.

Jon Lauckner, GM vice president of Global Program Management, said the Volt is uniquely built to accommodate a number of advanced technology propulsion solutions that can give GM a competitive advantage.

“That’s why we are also showing a variant of the Chevrolet Volt with a hydrogen-powered fuel cell, instead of a gasoline engine EV range-extender,” said Lauckner. “Or, you might have a diesel engine driving the generator to create electricity, using bio-diesel. Finally, an engine using 100-percent ethanol might be factored into the mix. The point is, all of these alternatives are possible with the E-Flex System.”

The Volt concept car is built on a modified future architecture, Lauckner said, similar to the one GM uses for current small cars, such as the Chevrolet Cobalt and HHR.

According to Larry Burns, GM vice president for research and development and strategic planning, the world’s growing demand for energy and its dependence on oil for transportation is the common theme behind today’s headlines.

“Whether your concern is energy security, global climate change, natural disasters, the high price of gas, the volatile pricing of a barrel of oil and the effect that unpredictability has on Wall Street – all of these issues point to a need for energy diversity,” said Burns. “Today, there are more than 800 million cars and trucks in the world. In 15 years, that will grow to 1.1 billion vehicles. We can’t continue to be 98-percent dependent on oil to meet our transportation needs. Something has to give. We think the Chevrolet Volt helps bring about the diversity that is needed. If electricity met only 10 percent of the world’s transportation needs, the impact would be huge.”

GM’s E-flex System moves automobile toward new electric age
GM’s E-flex System enables multiple propulsion systems to fit into a common chassis, using electric drive to help the world diversify energy sources and establish electricity from the grid as one of those sources.

“The DNA of the automobile has not changed in more than 100 years,” said Burns. “Vehicles still operate in pretty much the same fashion as when Karl Benz introduced the ‘horseless carriage’ in 1886.

“While mechanical propulsion will be with us for many decades to come, GM sees a market for various forms of electric vehicles, including fuel cells and electric vehicles using gas and diesel engines to extend the range. With our new E-flex concept, we can produce electricity from gasoline, ethanol, bio-diesel or hydrogen.

“We can tailor the propulsion to meet the specific needs and infrastructure of a given market. For example, somebody in Brazil might use 100-percent ethanol (E100) to power an engine generator and battery. A customer in Shanghai might get hydrogen from the sun and create electricity in a fuel cell. Meanwhile, a customer in Sweden might use wood to create bio-diesel.”

The Chevrolet Volt is just the first variant of the E-flex System. The Volt uses a large battery and a small, 1L turbocharged gasoline engine to produce enough electricity to go up to 640 miles and provide triple-digit fuel economy. GM will show other variations of the propulsion systems at future auto shows.

“GM is building a fuel cell variant that mirrors the propulsion system in the Chevrolet Sequel (fuel cell concept),” Burns said. “Instead of a big battery and a small engine generator used in the Volt, we would use a fuel cell propulsion system with a small battery to capture energy when the vehicle brakes. Because the Volt is so small and lightweight, we would need only about half of the hydrogen storage as the Sequel to get 300 miles of range.”

Environmentally conscious vehicles can be aesthetically appealing
With exterior proportions associated more with classic sports cars, the Chevrolet Volt conveys an immediate message of agility and sophistication. Twenty-one-inch wheels and sheer, taut surface relationships reiterate the statement. The Volt’s athletic design challenges the notion that an environmentally conscious vehicle can’t be beautiful and possess an aesthetic spirit that matches its driving characteristics.

“We leveraged our resources around the globe to develop the design aesthetic for the Volt,” said Ed Welburn, vice president, GM Global Design. “It was important that the design capture the face of the Chevrolet as it’s recognized around the world.”

True to the heritage of its Chevrolet bowtie, the Volt’s exterior design suggests spirited performance and is wrapped in a stylish package, with classic Chevrolet performance cues that hint at both Camaro and Corvette. On the inside, near-term technologies and innovative materials combine with ingenious use of ambient light for an interior environment that’s light, airy and thoughtful.

“First and foremost, this is an advanced technology vehicle that uses little to no fuel at all. But we didn’t see any reason why that should compromise its design,” said Anne Asensio, executive director, GM Design. Asensio led the design team that created the Volt concept, with designs solicited from GM’s studios around the world.

“We wanted a size that connected with everyone, so we designed a small car,” said Asensio. “In the end, the interior design team from England inspired the final interior execution, and the exterior is the work of the Michigan advanced design team.

“Our job was to design a vehicle people could easily imagine,” said Asensio. “It couldn’t be a ‘science project,’ because that’s not what this car is all about. It had to be realistic, executable and carry the essence of the Chevrolet brand.”