3D Map of Dark Matter in the Universe

Posted on Tuesday, Jan 09 2007 @ 00:40 CET by Thomas De Maesschalck
Astronomers created a 3D map with the positions of large amounts of dark matter in space and time

The map relied on data collected from more than half a million galaxies and spans a swath of the night sky that is nearly nine times the diameter of the full Moon. The map is detailed online in the journal Nature and was presented here Sunday at the 209th meeting of the American Astronomical Society.

"We've seen the first glimpse of the cosmic web which acts as the basic framework for large scale structures," said study team member Richard Ellis of Caltech. "This has been a prediction of the numerical simulations for many, many years."

"The point of it is that it's huge," Massey told SPACE.com. "Now we can really see a representative chunk of the universe. It's new in that we see the big picture."

The map also shows how the structure of dark matter has evolved through time. The researchers split the galaxies they observed into three groups, or "shells," depending on how far away they were from us. They determined distance by the amount of "redshift" observed in the galaxies' light. As the universe expands and stars and galaxies continue to race away from us, the wavelength of light they emit stretches and becomes slightly redder. 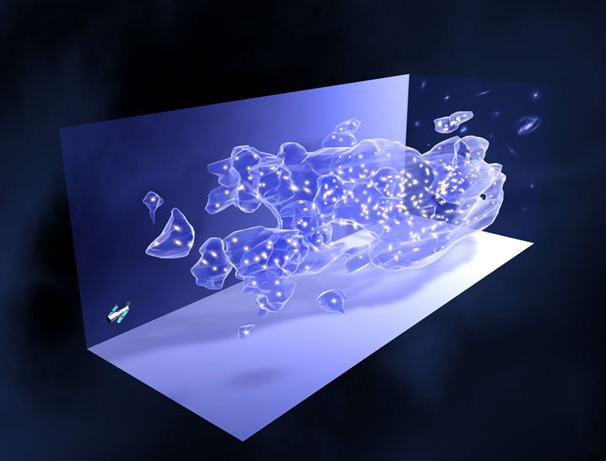