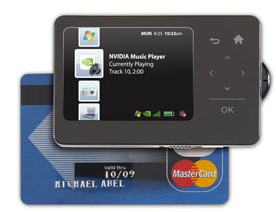 NVIDIA announced the latest version of its Preface Personal Media Display platform, a secondary processor and display subsystem that enables users to access information from their notebook or PC even when the main system is powered down. This latest version of NVIDIA Preface platform delivers wireless capabilities to the platform for manufacturers of handheld devices who want to provide customers the full benefits of Windows SideShow, a new feature of Windows Vista, while on the move.

Chosen as a CES Innovations Honoree for 2007, NVIDIA Preface provides notebook PC users running Windows SideShow with "always-on" access to e-mail, calendars, maps, and other data via a secondary display-even when the notebook is powered down. Notebooks with in-lid secondary displays and keypads based on NVIDIA Preface are expected to hit the market early this year.

The new extensions to NVIDIA Preface platform support Bluetooth wireless communication, which will allow Windows Vista PC users to access their data from companion devices. This capability, combined with the thin, low-power design of the NVIDIA Preface platform, opens the door to a wide variety of form factors, including: Such devices combine the benefits of portable consumer electronics devices with the versatile mobile computing features of Windows Vista, significantly enriching the evolving mobile and in-home consumer lifestyle.

SideShow devices communicate with the main PC via mini-applications called gadgets, which retrieve critical data from hard drives or online information sources. Several gadgets are expected to ship with Windows Vista, with many more available for download on the Microsoft Gadget Web site or pre-installed by the PC OEM or system builder. The NVIDIA Preface platform also includes native SideShow gadgets that interoperate with the built-in Music Player and Picture Viewer, both of which can operate even when the host PC is powered down.