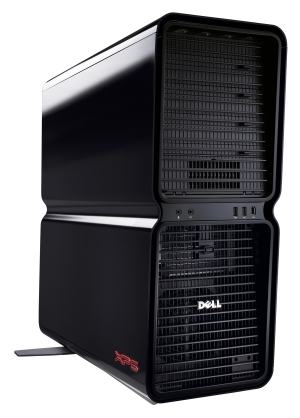 Dell unveiled the XPS 710 H2C (H2Ceramic) desktop PC which features a midnight-black case and a custom two-stage process cooling system. First, a liquid-to-air heat exchanger that works like a car's radiator removes most of the heat from the processor. Then, a fluid chiller removes more heat with ceramic-based thermoelectric cooling (TEC) modules like those used in space shuttles to transfer heat from the sunny side to the cold, dark side in space. Sensor controls help prevent the formation of frost or condensation by helping to keep the processor slightly above ambient room.

Here's a look at the specifications: The XPS 710 H2C Edition is really expensive, the basic configuration costs $5,499. Way too expensive for most people but the specs look pretty good.