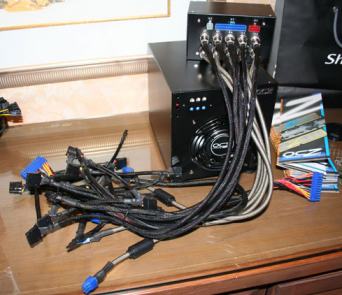 While the one from Ultra is just one PSU with the size of almost 2 PSUs, OCZ follows a different route and placed two 900W in an external box that connects to a smaller box that needs to be installed in your PC.

Modular approach resulted in enormous amount of cables for the components, so even connecting two motherboards should not prove to be a problem (or a motherboard and a rail for the external dual graphics box, but we didn't told you that).

ULTRA took a different approach, putting a single chassis system with separate power elements for the 12V, giving out 150 Ampers of power for the components that ride the 12V rail. There is also one small issue for US households. Since the electric current is specc'ed at 15A per socket, US users will have to use two power cables in order to get the PSUs running. In Ol' mother Europe, things will be fine... for the time being.