This hour I'm going to publish a small roundup of some sweet cars that were presented at the Detroit Auto Show this week. Normally I don't publish a lot of car news but I suppose most technology enthusiasts won't mind watching some pretty car pictures

I'll start with the Jaguar C-XF concept car which will be available as the Jaguar XF in Spring 2008. It's a beautiful four-door sedan car that will replace the Jaguar S-type sedans. It's a big improvement over the old S-type if you ask me, the new Jaguar XF looks a lot younger.

Details about the retail car aren't available but the concept you see in the photos sports a 4.2-liter supercharged V8 engine. Jaguar claims it's the most dynamic and modern four-door car they've ever created and the company says this is the new direction of Jaguar design.

Here's some more information from the press release:

The concept sedan features single, slim-wedged headlamps which have evolved from the twin-lamp motif seen on past Jaguars. The lights are thin and angular, producing an aggressive look for the car’s front profile. Running from the headlamps to the rear wheel haunch is an unbroken, main feature line that gives the car a sense of power and movement. Furthering the vehicles aggressive appearance are the muscular bonnet, side power vents, tapered tail and deeply recessed front grille.

The vehicle’s modern, sports design philosophy is applied to the cabin as well, with the emphasis tailored toward performance as opposed to luxury. Inside are lightweight, sculpted bucket-style front seats and twin individual rear bucket seats. Running in between the seats is a tall, central transmission tunnel that gives the occupants a sense of sitting deep within a futuristic cockpit. In addition, a brushed aluminum fascia wraps around the cabin, producing a dynamic linear graphic that instills a sense of velocity. Design Director Ian Callum describes the cabin of the all-new C-XF concept car as “one of the most exciting interiors Jaguar has ever done.”

Enhancing the cabin experience is the introduction of the vehicle’s new technologies that blend simplicity of design with practical innovation. JaguarSense, a prototype technology which employs motion detecting sensors to activate certain vehicle features, reacts to the sweep of a hand, making it advance yet intuitive. Also, the C-XF has a jewel-like Power button that pulses like a heartbeat on the center console and once pushed, aluminum rings lower from the center console to reveal the gear shift knob. As the engine starts, a blue light sweeps around the cabin, the entire roofline illuminates with a muted blue light and a final blue light shines from the front grille, signifying the car’s ignition. 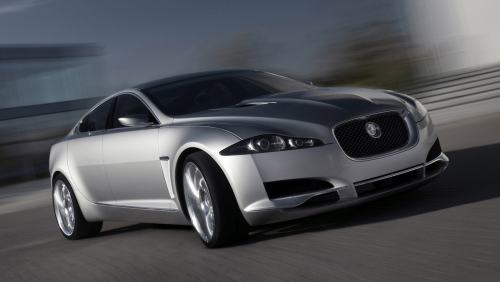 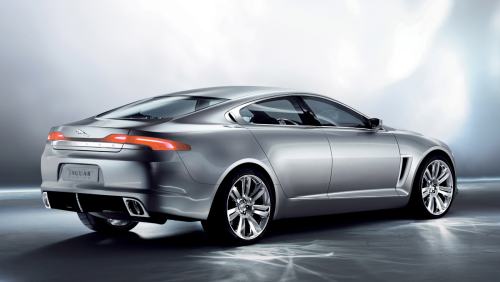 By the way, I heard this week that the Jaguar XF will be featured in the next James Bond movie.