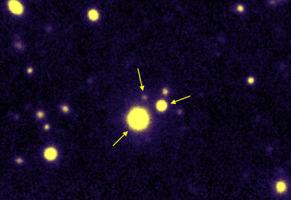 Quasars are enormously powerful astronomical objects that emit a galaxy's worth of energy from a region the size of our solar system. Scientists believe quasars are powered by gas and dust falling into enormous black holes at the heart of some galaxies.

The three quasars are 10.5 billion light-years away from Earth, but are only a hundred thousand light-years apart from each other.

Because light from the quasars has been in transit for billions of years, looking at them is also peering backward into the universe's distant past, astronomers note.