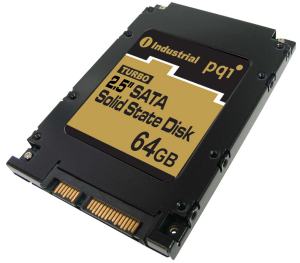 PQI presented its Turbo SATA Solid State Disk, a 2.5" SSD with a capacity of 64GB. The application of SATA technology and specially designed clip-on connector on SATA DOMs provide stability and prevent connectors detaching unexpectedly. The implementation of SATA interface on industrial storage is a world’s first and another breakthrough is the maximum capacity of 64GB on Turbo SATA SSD 2.5” drives.

PQI DiskOnModule Manager, Bob Chu states, “With flash storage technology catching up to traditional disc platter storage devices and motherboard designs being more compact than ever, most IDE connectors have been replaced by the smaller and faster SATA interfaces. At the same time, available spaces for device(s) have been reduced dramatically and hence, SATA DOM was developed. SATA interface takes up less space and provide faster transfer rate (up to 100MB/sec) than IDE connectors and maximum SATA DOM capacities will likely reach 128GB in 2007.

The price of these solid state disks isn't available but it won't be cheap. My guess is that it's at least $1,000, possibly a lot more.