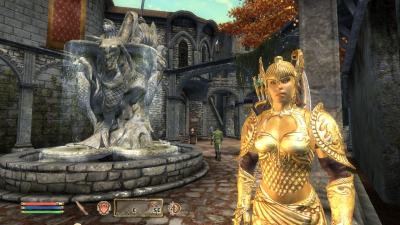 Bethesda Softworks announced an expansion for Elder Scrolls IV: Oblivion called Shivering Isles. This expansion pack will be released for the PC and Xbox 360 this Spring, it will feature more than 30 hours of new gameplay.

Shivering Isles will unveil a new plane of Oblivion, the realm of Sheogortah, the Daedric Prince of Madness.

Within the Realm of Sheogorath, players can explore the two extreme sides of the god’s madness – the sublimely creative and the completely psychotic. Something is happening to the Shivering Isles and Sheogorath himself looks to you to be his champion and defend his realm and its inhabitants from destruction. Do you have the strength to survive his trials, tame a realm fraught with paranoia and despair, and wear the mantle of a God?

The Shivering Isles features a bizarre landscape split between the two sides – Mania and Dementia –filled with vast, twisting dungeons mirroring the roots of the trees they are buried within. You’ll encounter more than a dozen new creatures including hideous insects, Flesh Atronachs, skeletal Shambles, amphibious Grummites. Throughout your adventure, you will discover all new items, ingredients, spells, and more, and have the talented craftsmen of Crucible and Bliss forge new armor and weapons just for you.