They resemble systems cannibalized by the Milky Way billions of years ago and help close the gap between the observed number of dwarf satellites and theoretical predictions.

A recent sky survey has turned up eight new members in our Local Group of galaxies, including a new class of ultra-faint "hobbit" galaxies and what might be the smallest galaxy ever discovered.

The Local Group is a collection of about 40 galaxies, of which the Milky Way and Andromeda are the dominant members. The rest of the galaxies are mostly small satellites known as “dwarf galaxies” that are gravitationally bound to these two galaxies. The Large and Small Magellanic Clouds are two of the Milky Way’s better known dwarf galaxies.

The new galaxies were detected over the past two years as part of the Sloan Digital Sky Survey and presented last week at the 209th meeting of the American Astronomical Society in Seattle. 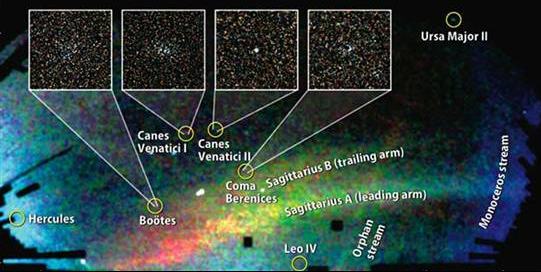