I've never really heard much about this file format but according to CNET, Microsoft will push the HD Photo format (formerly called Windows Media Photo) in Windows Vista.

"HD" doesn't actually stand for "high definition," but it's supposed to connote the better image quality that comes with HD TV. Rico Malvar, a Microsoft Research director who helped develop the format, said that compared with JPEG, HD Photo preserves more subtle details, offers richer colors and takes up half the storage space at the same image quality.

It is tough to get new image formats to catch on, much less to replace prevailing standards, but Microsoft has two strong forces on its side.

So why is HD Photo better than JPEG? Here are some quick comparisons: Windows Vista is the first operating system with built-in support for this new image format and Adobe will release a HD Photo plugin for both the Windows and Mac OS X version of PhotoShop CS3.

However, it will be hard to replace JPEG.

"JPEG is an industry standard with a variety of quality levels within its architecture," said Sally Smith Clemens, a product manager at Olympus Imaging America. "A replacement format would have to offer very broad support from many developers of both hardware and software to be practical or considered." 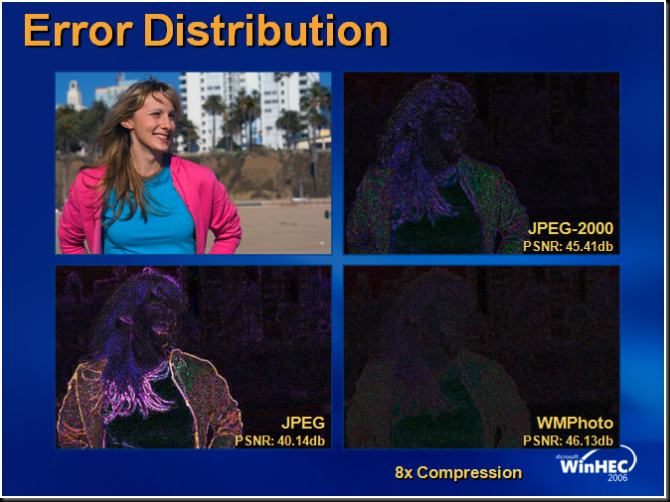 Here's a comparison from Microsoft of the JPEG, JPEG-2000 and HD Photo image file formats. The picture in the upper left is the uncompressed raw image file and the other images were compressed to 12.5% of the original file size. The compressed images were then subtracted from the uncompressed image and the absolute value is amplified to compare how many errors there are. In this case, less color means better - totally black would mean there was no difference in quality.