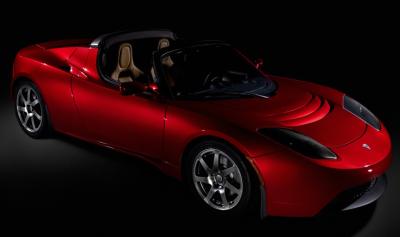 Do you think cars with electric engines are dull, ugly and only for threehuggers? Well, I lost this feeling when I heard about the Tesla Roadster from Tesla Motors last year. This is an amazing 100% electric powered sports car that goes from 0 to 60mph in 4 seconds!

Other things Tesla Motors boasts about is the fuel economy which is equivalent to 135mpg, making it one of the most efficient sports cars. The cost per mile is only $0.01 and you can drive up to 250 miles per charge, for more information you can check out Tesla Motors' website.

Now this is all pretty old news, the new thing is that Tesla Motors released some amazing videos of safety testing in cold icy Sweden.

In January 2007 our engineers traveled with one of the prototype Tesla Roadsters to Arvidsjaur, Sweden, to perform ABS and other safety testing. Located 110 km south of the Arctic Circle, Arvidsjaur is one of Europe’s most extreme environments and a location favored by car manufacturers worldwide for cold weather testing. We used frozen lakes and remote roads in the area to put the Tesla Roadster through its paces. For a sample, check out the videos below. They demonstrate some of the traction control (which limits the amount of slip between the front and rear wheels) and ABS testing.

The car is driven around a circular ice track with the pedal to the floor. The traction control is limiting the actual throttle command to keep the car stable. When the car starts to drift sideways from loss of traction, the traction control system detects the rear wheels are spinning faster than the front wheels and automatically reduces the torque to the rear wheels.

The car is driven at high speed over a split surface (otherwise known as a "split-mu" course), where one half of the car is over a heated patch of asphalt (high-mu) and the other half of the car is over ice (low-mu). Braking is applied and the car must remain stable and stop in a straight line. The ABS system detects the wheels locking up on the icy side and automatically reduces the braking pressure on that side.

Amazing how fast it stops on ice here in this video.

You can order it right now at Tesla Motors. Availability is planned for April 2008 but the base price of $92,950 makes it a bit too expensive for most people.