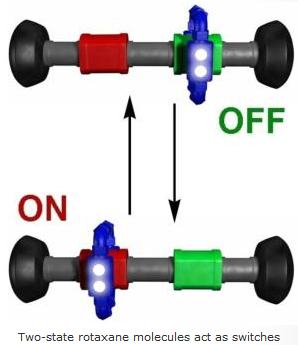 The 20 kilobyte memory device has a bit density of 100 gigabit per square centimeter and has enough capacity to store the Declaration of Independence with space left over. The accomplishment represents an important step toward the creation of molecular computers that are much smaller and could be more powerful than today's silicon-based computers.

“Using molecular components for memory or computation or to replace other electronic components holds tremendous promise,” said J. Fraser Stoddart, who is the Fred Kavli Chair in Nanosystems Science at UCLA and director of the California NanoSystems Institute. “This research is one of the only examples of building large molecular memory in a chip at an extremely high density, testing it, and working in an architecture that is practical, where it is obvious how information can be written and read.”

The memory uses series of perpendicular, crossing nanowires. It has 400 silicon wires crossed by 400 titanium wires, each only 16nm wide.

“For this commercial dream to be realized, many fundamental challenges of nano-fabrication must be solved first,” Stoddart said with regard to Caltech's breakthrough. “The use of bistable molecules as the unit of information storage promises scalability to this density and beyond. However, there remain many questions as to how these memory devices will work over a prolonged period of time. This research is an initial step toward answering some of those questions.”