As you can see, Dell's market cap took a serious hit since Kevin Rollins became CEO in 2004 while HP's market cap almost doubled since Carly Fiorina got fired in 2005. There's now a $63 billion gap in market cap on the stock market.

Michael Dell yesterday announced he's going to lead Dell again, probably to restore the company's glory. HP beat Dell by becoming world's biggest PC maker in the third quarter of 2006, and managed to further increase its lead over Dell in the fourth quarter. 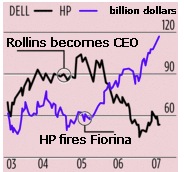