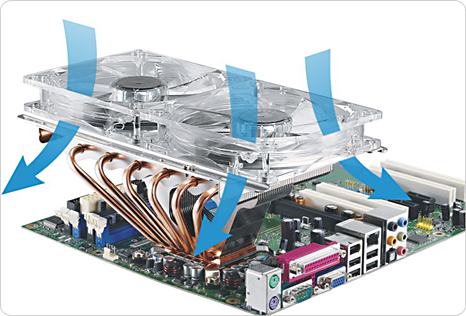 Cooler Master prepared a huge new cooler for Windows Vista systems that cools both the processor and the motherboard of your PC. According to Cooler Master the GeminiII is the first mainboard and CPU cooler in the world.

The fans draw cool air from above and direct airflow downwards, cooling your motherboard in multi-directions.

You have the option to choose fans that have the best silent performance and you can decide whether to mount 1 or 2 fans to suit your needs. The adjustable bracket design permits flexible positioning and decrease interference.

The GeminII has a universal design and is compatible with the AMD Athlon 64 X2 dual-core and Intel Core 2 Duo/Extreme/Quad processors.

This cooling solution looks really heavy, according to the specs it weighs 847g so lets hope it won't snap too many motherboards. The GeminiII will become available in retail stores next month.

Update: I've found some more information about this cooler. I've updated this article with the weight and I've also found out that with the included fans the noise is only 20.7dBA.

I also managed to get my hands on some benchmark results (bear in mind that this benchmark was performed by Cooler Master).

Here are the specifications of the test system they used:

Temperatures were measured with an electronic thermometer and the ambient temperature was 27°C. Here are the results: