First quantum computer to be tested on Tuesday 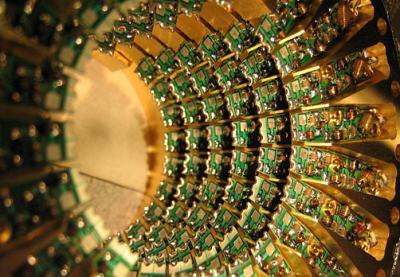 D-Wave says they've created world's first quantum computer. They're going to show it off on Tuesday.

Hey, wait a minute. This first foray into the strange-but-maybe-true world of quantum mechanics wasn't expected by scientists until 20 years from now. It will allegedly take the computing world quantum leaps ahead, allowing a computer to perform 64,000 calculations at the same time.

As skeptical scientists the world over scratch their heads (and some roll their eyes), the British Columbian D-Wave vows to prove naysayers wrong at the Computer History Museum in Mountain View, California next week, firing up this box that's somehow able to contain multiple quantum states that exist at the same time. Huh? For example, each bit in this machine can be both a zero and a one simultaneously. It's making our heads hurt just thinking about it. Wrap your head around these two additional, strangely beautiful pics: