Posted on Thursday, Mar 01 2007 @ 00:05 CET by Thomas De Maesschalck
Major IT players announced the formation of The Green Grid, a new industry group which will focus on making server rooms more power efficient. The group features representatives from AMD, Intel, Microsoft, Dell, HP, IBM and others.

Electricity is being wasted at an alarming rate by most current servers. A typical 2U server with dual processors runs on a 450W power supply. Of that, 35 percent (160W) is lost just in the power conversion process inside the machine. This doesn't just cost money for a bit of wasted power; it also costs money for the additional cooling required to keep the datacenter at a constant temperature, and it limits the total number of servers that can be installed in a datacenter due to power constraints.

The result, according to Gartner, is that 50 percent of datacenters worldwide will max out their available electrical power by the end of 2008. With server racks now able to draw nearly 30,000W per rack, it's easy to see how power is becoming a key problem for the industry.

The Green Grid hopes to bring the industry's innovative minds together to do three things: minimize a datacenter's power needs, maximize the percentage of power that is used to run servers (focusing on power supplies and converters), and minimizing the amount of power spent on other items (chillers, lights, etc.). 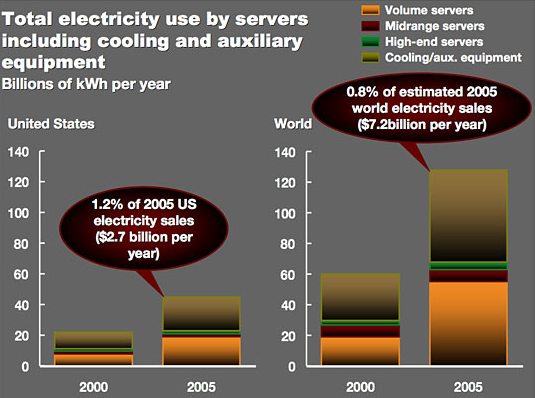