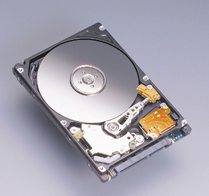 Fujitsu released its MHW2 BJ series HDD today, these are new 2.5" 7,200RPM HDDs with a capacity of up to 160GB. They support Serial ATA 3.0Gb/s and will be available in May.

In addition to achieving the world's leading storage capacity, MHW2160BJ is capable of data transmission speeds at up to 300 MB/s, the fastest rate in the industry. The series also features best-in-class acoustic noise level of 2.5 bels at idle, and low-power consumption, operating at 2.3 watts or less when reading or writing data.

As the use of notebook PCs becomes even more popular, there is demand for high reliability notebook PC HDDs that offer high-speed and high-capacity performance on par with those used in desktops. The MHW2 BJ series meets this demand with a speed of 7,200 rpm, the highest of any serial ATA 2.5" HDD. These HDDs boast the high quality Fujitsu customers come to expect, and they can be easily incorporated into high-performance notebook PCs and flat panel desktop PCs, both of which are expected to gain popularity. They are also RoHS compliant.