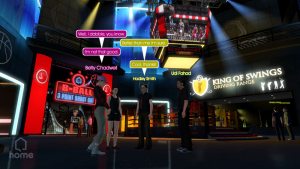 DailyTech has a bunch of information about Sony's upcoming PlayStation Home service:

After a week of anticipation, PlayStation Home is finally official. Sony released screenshots of what many have been terming “online identities” or “avatars.” Unlike the cartoony look of Nintendo’s Miis and the feature-filled interface of Xbox Live, PlayStation Home adopts the “virtual world” concept that, at first glance, looks similar to Second Life.

Avatars in PlayStation Home can be customized with many different variations of clothing, body and facial features. Its character creation process is akin to that found in many MMORPGs. PlayStation Home users can walk around and socialize through voice or text chat, and play together on casual games like pool and bowling, or ones downloaded from the PlayStation Network.

Animated emotes such as dancing are used to convey actions and emotions, also like those found in online games. Players can communicate by typing to each other, where a USB keyboard would be very handy, or through speech by using any Bluetooth headset. Users can also “quick chat” through pre-written dialog and responses, which may open doors for users speaking different languages to convey understandable messages to each other.