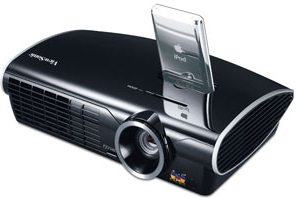 Laptop Mag writes about the new ViewSonic PJ258D - a $949 projector with a built-in iPod dock.

Among the hordes of new iPod accessories on the market, perhaps the most intriguing is the $999 ViewSonic PJ258D projector-and it's a pretty powerful one at that. Under its slick, glossy black exterior beats the heart of a business projector that might outshine much of its competition. Although it weighs less than four pounds, the manufacturer claims it can beam out 2000 ANSI lumens, and on our lab test, we saw no fewer than 2265 lumens.

But the PJ258D is focused more on Pirates of the Caribbean than on PowerPoint. Just insert a video iPod into the oversized dock on the projector's top panel and you can start watching your video in a size limited only by the dimensions of your walls. The projector's remote has control buttons that relay directly to the iPod. The process works extremely well, considering there was no laptop or DVD player involved. The only problems we saw were some slight motion artifacts caused no doubt by the iPod.