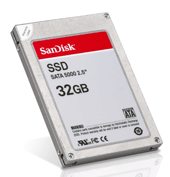 “The SanDisk 2.5-inch SSD brings the extreme durability, outstanding performance and low power consumption of solid-state flash memory to the entire notebook computer market,” said Amos Marom, vice president and general manager of the Computing Systems division at SanDisk. “As SanDisk continues to drive innovation in flash memory, the per-gigabyte price of SSD storage will come down and SSD capacity will go up. PC manufacturers and consumers will find it easier and easier to move away from rotating hard disks to the superior experience of SSDs.”

The benefits of this drive according to SanDisk: The major disadvantage is the price. For this small 32GB drive you have to pay $350 in "large volume orders".