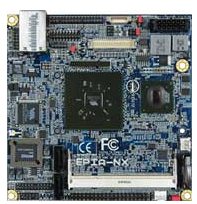 VIA presents its new VIA EPIA NX nano-ITX motherboard which measures only 12cm x 12cm:

Available with the 1.5GHz VIA C7 processor, or the 1.2GHz VIA Eden processor for the fastest fanless configuration, the VIA EPIA NX offers a host of advanced multimedia features through the VIA CX700M2 system media processor. This all-in-one digital media IGP chipset integrates the VIA UniChrome Pro II 2D/3D graphics core and an extensive array of high end audio and video technologies, including Vinyl Multi-channel HD audio, hardware MPEG-2/-4 and WMV9 video decoding acceleration, and a built-in HDTV encoder up to 1080i for the richest entertainment experience.

The VIA CX700M2 system media processor features the VIA UniChrome Pro II 2D/3D graphics core, and boasts the VIA Chromotion CE video display engine, including an integrated HDTV encoder that utilizes an advanced ASIC with VIA's Advance ProScale® Technology to scale the input resolution for 640x480 up to 1024x768 encode for 1080i, 720p standard HDTV resolution output, as well as hardware decoding acceleration of MPEG-2/-4 and WMV9 video. The latest high definition audio is supported through VIA Vinyl 8-channel HD audio, and a rich range of display options includes an integrated LVDS connector plus a DVO pin connector for an additional LVDS panel through an appropriate daughterboard, plus a TV-out connector for S-Video, Component and Composite display outputs for unparalleled flexibility.

The VIA EPIA NX Nano-ITX mainboard has two Serial ATA connectors for full featured native SATA II RAID 0, 1, 0+1, configured using the VIA DriveStation SATA RAID with the VIA CX700M2, an Ethernet port for seamless broadband connectivity with the optional upgrade of Gigabit Ethernet, and supports up to 1GB of DDR2 400/533MHz SO-DIMM memory.