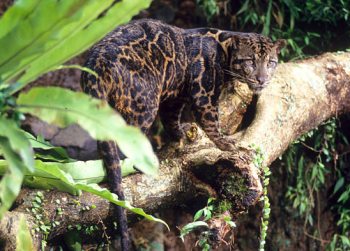 Genetic scientists found a new species of clouded leopards on Sumatra and Borneo:

Until now it had been thought they belonged to the species that is found on mainland southeast Asia.

Scientists now believe the two species diverged more than one million years ago, and have evolved separately since.

Clouded leopards are the biggest predators on Borneo, and can grow as large as small panthers.

The separation of the species was discovered by scientists at the US National Cancer Institute near Washington DC.

"Genetic research results clearly indicate that the clouded leopards of Borneo should be considered a separate species," said Dr Stephen O'Brien, head of the Institute's Laboratory of Genomic Diversity.

"DNA tests highlighted around 40 differences between the two species."