AMD revealed some info about Torrenza, its accelerated computing platform. The firms says Torrenza is to create a platform where application-specific processors can interact cost effectively and offer better performance than a general purpose CPU, while remaining compatible with off the shelf platforms.

AMD guidance revealed this week that future processors will also have integrated "accelerators" embedded into them. A Torrenza system will have at least two sockets, and both will accept accelerators and accelerated CPUs.

One accelerated-processor project on AMD plate, slated for 2008 under the codename Fusion, and combines a dedicated GPU or GPU accelerator onto the same package or even the same silicon die as the main CPU. AMD has already set the ground-work for Fusion processing with its Stream Computing initiative -- utilizing ATI-based graphics adaptors for heavy number crunching.

Other Torrenza ready projects are also coming to light. Clearspeed announced its CSX600 math-coprocessor plug-in last year, with the stated intention of creating a socket plugin version for Torrenza. Los Alamos National Labs is currently building the world's fastest supercomputer, Roadrunner, with Opteron and Cell processors on the Torrenza platform. 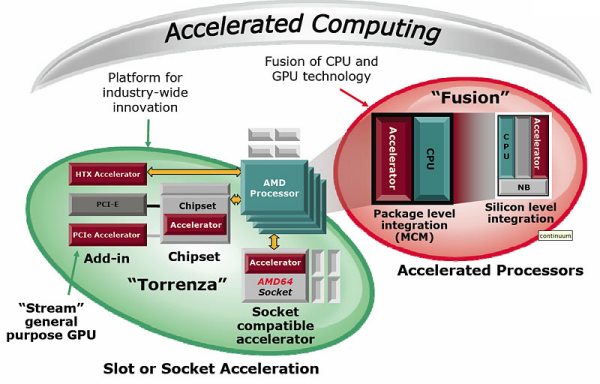 A competitor to AMD's Torrenza from Intel is expected by mid-2008.