Posted on Monday, Mar 26 2007 @ 01:16 CEST by Thomas De Maesschalck
Astronomers got a detailed look at how supersonic "bullets" of gas pierce through dense clouds of hydrogen gas in the Orion Nebula.

Each bullet is about ten times the size of Pluto’s orbit around the Sun and travels through the clouds at up to 250 miles (400 kilometers) per second—or about a thousand times faster than the speed of sound.

The bulk of both the bullets and the surrounding gas cloud [image] consists of molecular hydrogen. The tip of each bullet is packed with iron atoms that are heated by friction and glow bright blue in the new image, taken by the Gemini Observatory in Hawaii.

As the bullets plow through the clouds, they leave behind tubular orange wakes, each about a fifth of a light-year long. A light-year is the distance light travels in a year, about 6 trillion miles (10 trillion kilometers).

The Orion Nebula is a young stellar nursery located about 1,500 light-years away. Scientists think our Sun was born in a similar environment some 4.5 billion years ago. 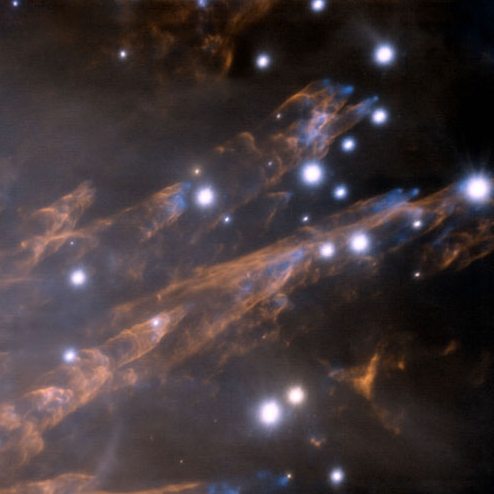