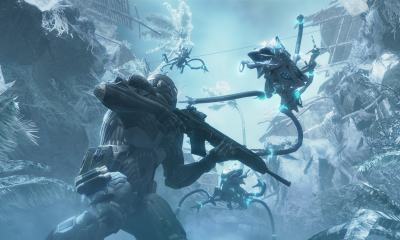 The guys from Play.fm had a Q&A session with Crytek on their upcoming Crysis game.

Which of the gameplay features or elements is going to make the gaming community sit up and take notice?

The Muscular Nano Suit with its versatile modes and the real-time customization of weapons will give players the ability to adjust their personal play style dynamically throughout the game. Every player will be able to experience Crysis in the way he wants, be it using stealth and sneaking through the undergrowth or charging the enemy head-on with guns blazing.

The story of the game seems to be similar to its spiritual predecessor (Far Cry) in as its two armed groups show up on an island, start getting into a bit of a ruckus, and then decide they're better off teaming up and shooting at the monsters instead. What can we expect in terms of plot and character development?

We spend a lot of time and effort on the story and character development to make sure it is true to our vision. For example, the Aliens took us almost a year to get exactly right. You can expect to be amazed.