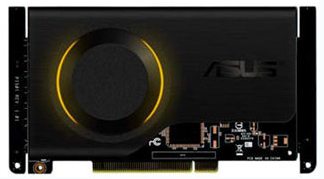 Our friends from VR Zone uncovered some details about the upcoming Xonar sound card lineup from Asus. The cards will be primarily aimed at gamers, as well as music and digital home users.

There are two versions: the PCI-based Xonar D2 and the PCI Express D2X:

Xonar D2/X supports 192K/24-bit with 118dB SNR for playback and 115dB SNR for recording. It supports HW accelerated EAX 2.0 and OpenAL under Windows XP but not Windows Vista since Hardware Abstraction Layer (HAL) is removed. Without that, games using DirectSound3D will be rendered in software mode without EAX. It doesn't affect new game titles since most of them run on OpenAL. Creative faced the same problem with their X-Fi sound cards therefore they have a ongoing ALchemy project to convert EAX into OpenAL so perhaps CMedia or ASUS can follow suit.

Other features include supports for Dolby Digital Live and DTS Connect to convert gaming audio into Dolby Digital & DTS 5.1 channels surround signal for Home Theater systems. It also supports Dolby Headphone and Dolby Virtual Speaker to provide 3D sound positioning over headphones and speakers. ASUS promises they will provide constantly updated drivers on both XP and Vista to the consumers

The cards look pretty cool but it will be interesting to see whether Asus will be able to meet their goal to ship 500,000 units this year. Years ago most PCs had discrete sound cards but since the rise of motherboard chipsets with integrated audio the market for this kind of addon cards kinda collapsed.