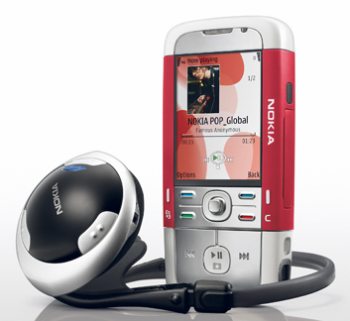 Using an optional 2GB MicroSD card, the Nokia 5700 XpressMusic supports up to 1500 tracks that can be enjoyed using Bluetooth stereo headphones, with their own favorite 3.5mm plug-equipped headphones and the included headset adaptor or through built-in stereo loudspeakers. Loading songs onto the Nokia 5700 XpressMusic is fast and easy as consumers can choose from a broad range of supported digital formats, including WMA, MP3, AAC, as well as eAAC+ and MP4. When purchasing music online, shoppers again have the luxury of choice as they can select from a range of Internet music stores, also those utilizing Windows Media Player Digital Rights management (WMDRM). The optimized music player in the Nokia 5700 XpressMusic supports album art, playlists, plus a 5-band equalizer and audio visualizations.

More than a music-only device, the Nokia 5700 XpressMusic brings videos to life on a vibrant color screen supporting up to 16 million colors for exceptional video playback. With 3G high-speed data connectivity, the Nokia 5700 XpressMusic makes browsing, downloading and streaming multimedia content much more convenient and faster than before. A video call feature and the built-in 2 Megapixel camera make it easy to share moments with friends and family.