Posted on Monday, April 02 2007 @ 0:46 CEST by Thomas De Maesschalck
You're high above the desert peaks. Your aircraft are approaching their targets. Information from instruments, cameras and radar is before your eyes. And with the help of 100 million pixels of bright and vivid virtual reality you're in control of a swarm of U.S. Air Force unmanned aerial vehicles.

That virtual battlespace will be just one of the applications you could experience when Iowa State University's Virtual Reality Applications Center unveils its improved virtual reality room on April 26. The demonstrations will show off the room's new abilities to produce virtual reality at the world's highest resolution.

Crews have recently completed nearly $5 million in equipment upgrades to C6 and the technology that operates it. Iowa State's C6 now projects more than twice the resolution produced by any other virtual reality room in the world. It also projects 16 times the pixels produced by the original C6.

Iowa State's C6 opened in June 2000 as the country's first six-sided virtual reality room designed to immerse users in images and sound. The graphics and projection technology that made such immersion possible hadn't been updated since the C6 opened.

The difference between the original equipment and the updated technology "is like putting on your glasses in the morning," said James Oliver, the director of Iowa State's Virtual Reality Applications Center and a professor of mechanical engineering. 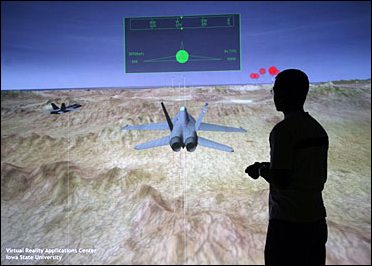 The new equipment -- a Hewlett-Packard computer cluster featuring 96 graphics processing units, 24 Sony digital projectors, an eight-channel audio system and ultrasonic motion tracking technology -- were installed by the Mechdyne Corp. of Marshalltown. The project is supported by a U.S. Department of Defense appropriation through the Air Force Office of Scientific Research.

The April 26 demonstration of the higher speeds, better pictures and improved realism in C6 will also show the technology's versatility. Featured applications will show how researchers are using C6 to visualize data from as many as 22,000 genes, train soldiers for urban combat, show students how plant photosynthesis works, display data from an atom probe microscope and help engineers visualize new products. A new demonstration application will also take you on a virtual trek to a tropical island, including a hovercraft trip over the sea and a dive to explore a shipwreck.

Oliver is leading the research team that's using C6 to develop a control interface for the military's next generation of unmanned aerial vehicles. The researchers are building a virtual environment that allows operators to see the vehicles, the surrounding airspace, the terrain they're flying over as well as information from instruments, cameras, radar and weapons systems. The system would allow a single operator to control many vehicles.

The C6 upgrade will move that project forward, Oliver said.

"The idea is to get the right information to the right person at the right time," Oliver said. "There's a tsunami of information coming toward you and you have to convey it effectively. We think this kind of large-scale, immersive interface is the only way to develop sophisticated controls."

So those 100 million pixels are going to make a difference, Oliver said.

"Seeing is going to be believing," he said. "This upgrade will enhance our ability to amplify the creativity and productivity of people. It will help us build on the center's record as a world leader in virtual reality. And it's one more way Iowa State can be the best at putting science and technology to work."