Posted on Tuesday, Apr 03 2007 @ 03:46 CEST by Thomas De Maesschalck
The CrossFire Express 3200 chipset from ATI for the Intel platform survived the acquisition by AMD and now DFI offers us the LANParty UT ICFX3200-T2R/G motherboard. The ICFX3200 from DFI is the only motherboard on the market that uses the ATI RD600 chipset.

LANParty designs are known for their flash, and the ICFX3200 is no exception. The board is peppered with fluorescent yellow and orange, and the ports and slots even glow under UV light, so it makes quite a statement in a properly-lit and windowed enclosure.

Most of us will be more concerned with the board's layout, but it doesn't disappoint there, either. DFI gets off to a good start at the top of the board, where we find both sets of power connectors. Each connector is located on or near an edge where cabling won't interfere with airflow around the CPU socket or rear chassis exhaust. The auxiliary 12V power connector has eight pins, although the board is still compatible with four-pin power supplies. 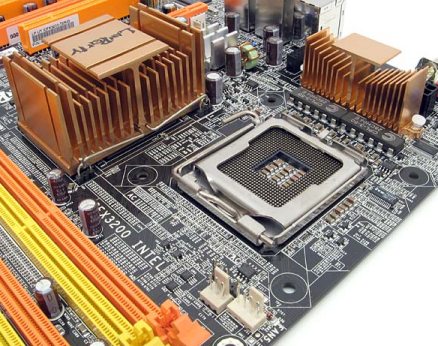 After putting the board through their tests, The Tech Report is disappointed and says that at $199 they can't recommend this motherboard. The motherboard has some good elements but the performance was worse than its competitors and the overclocking performance was unremarkable. The reviewer also complains a bit that the BIOS is a bit too complicated for the mainstream enthusiasts.

So the ICFX3200 isn't a mouth-watering blend of flavors from AMD and Intel, and it's certainly not something we'd recommend given the $200 asking price. However, it does give us faith in DFI's ability to push the envelope. Now all they need to do is build a Core 2-compatible LANParty board based on a better chipset.