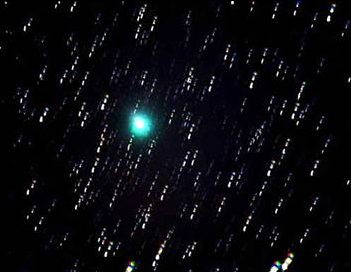 An Australian discovered a new comet with an off-the-shelf digital camera last month. He spotted a green comet which is now known as Comet Lovejoy (C/2007 E2).

On March 15th, Terry Lovejoy of Thornlands, Queensland, Australia, discovered a 9th-magnitude comet in the southern constellation Indus the Indian. In reporting the find to the Central Bureau for Astronomical Telegrams (CBAT), in Cambridge, Massachusetts, Lovejoy described the comet as having a coma that appeared distinctly green in color, with a slight extension to the southwest.

Remarkably, Lovejoy made the discovery not with a telescope but using an off-the-shelf digital camera! In fact, it appears to be the very first case of the discovery of a comet discovered in this manner.

Lovejoy was using a Canon 350D with a zoom lens set to 200-mm focal length at f/2.8. Lovejoy spotted the object near the frame edge in 16 exposures of 90 seconds each. The images were obtained during a comet-hunting survey that Lovejoy has been conducting for more than two years.

More info at MSNBC. The comet should be visible by the end of this month:

During April 20-25, the comet will appear to cross the Milky Way while passing through the southern half of Aquila the Eagle. This is also about the time when it will be passing closest to Earth (41 million mi/66 million km, Apr. 24-26) and should appear at its brightest. Toward month's end, it will glide between Lyra the Lyre and Hercules, and appearing to pass almost directly overhead at around 3 a.m. local daylight time.