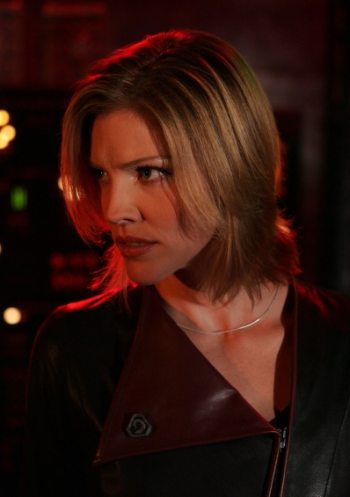 The guys from GameSpy had the chance to interview both Grace Park and Tricia Helfer. These actresses are best known for their performance in Battlestar Galactica but the focus of this interview is their role in the new Command & Conquer 3: Tiberium Wars game.

Here'a a short snip from the interview:

GameSpy: Did they try and get you to wear some super-revealing costume?

Grace Park: It was funny, I first heard that I was going to be wearing this micro mini-skirt that was all studded with rhinestones. And I thought, "Are they having me play some dragon lady fantasy character, because I thought I was playing an officer." But then, when I got there, it was just a collared t-shirt and a skirt. Though it was a tight skirt. In fact, it was so tight that the costume designer had to go up the skirt and pull down the shirt from the inside so it would be straight.

GameSpy: So was anyone else from Galactica bummed that they're not in the game with you two?

Grace Park: Yeah, I think Katee [Sackoff, who plays Starbuck] was really bummed out that she wasn't in it. No, I'm kidding.

Tricia Helfer: Besides, Tahmoh [Penikett, who plays Helo on Galactica] had already been in a game [Need For Speed: Carbon]. I think we're all just excited when somebody does something because we all genuinely like and respect each other.