Posted on Friday, Apr 06 2007 @ 03:35 CEST by Thomas De Maesschalck
IGN offers us a new preview of the Spider-Man 3 game. They report Spider-Man 3 is more than just a Spider-Man 2 game with a bit better graphics:

"You can see that we've really redone the city from the ground up," said Will Townsend, associate producer on Spider-Man 3 as he maneuvered Spider-Man around New York -- a New York that's 2.5 times bigger than it was Spider-Man 2. "It's been his office before, but now, it's his playground."

"The repetition was something that we were criticized for in the past," Townsend said.

Lame-ass balloon-catching missions and a handful of other constantly repeating tasks? Gone. Spider-Man 3 is going to boast at least 21 city objectives that'll pop up as Spidey makes his way from point A to point B. 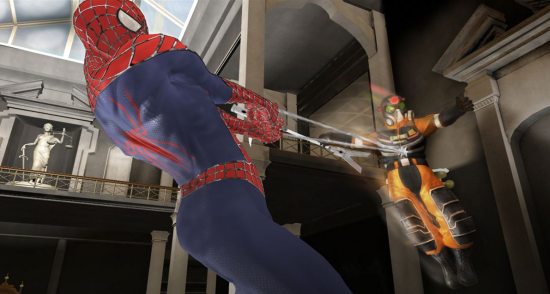 Looks like a pretty neat game. It will be released on May 4th for lots of different platforms: Wii, PS3, PS2, Xbox 360, PC, Nintendo DS, PSP and GBA.